American composer. His earliest musical studies were piano lessons with his sister Katharine. In about 1899 he began to study the piano with Mary Selena Broughton, who taught at Elmira College and who had a profound influence on his personal and musical development; she both suggested and financed his musical studies in Berlin. When Griffes left for Germany in August 1903 his goal was to prepare himself for a career as a concert pianist. In Berlin he enrolled at the Stern Conservatory, then directed by Gustav Hollaender. There he studied the piano with Ernst Jedliczka and Gottfried Galston, composition with Philippe Rüfer, and counterpoint with Max Loewengard and Wilhelm Klatte.

In spite of some recognition at the conservatory as a performer, Griffes became more and more interested in composition and, in September 1905, against the advice of Miss Broughton, he left the conservatory for study in composition with someone more progressive than Rüfer. Between October 1905 and April 1906 he took about a dozen lessons with Humperdinck; other demands on Humperdinck’s time precluded any more. He continued to study the piano with Galston, until July 1907, taught the piano and gave harmony lessons to about six private students; he also appeared in public a few times as accompanist and piano soloist. During his four years in Berlin he was active as a composer; among the extant works from this period are several German songs and the Symphonische Phantasie for orchestra. 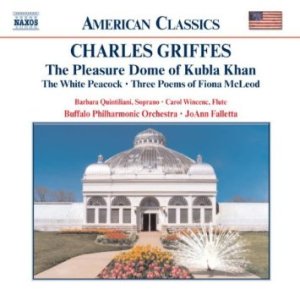 Griffes returned to the USA in July 1907 and in September of that year became director of music at the Hackley School in Tarrytown, New York, a post he held until 1920. His years at Hackley have been described as grim and unrewarding, but the picture of Griffes as a starving, frustrated, overworked artist trapped in the cultural wasteland of Hackley is not altogether true. The job may not have offered many challenges or rewards, but his modest salary, room and board in a beautiful and protected environment, leisure time, the esteem in which he was held by students and colleagues and the prestige of Hackley itself gave him a sense of security and satisfied his need for environmental and financial stability in no small way. Griffes often remarked to his sister, Marguerite, ‘I am not the kind of artist who is willing to starve in a garret’. He spent his free time at Hackley composing, and most of his summers in New York both composing and promoting his music. His first published works, five German songs, appeared in 1909. There were several important premières of his music during his lifetime: Sho-jo and Five Poems of Ancient China and Japan, 1917; the Piano Sonata, 1918; and The Pleasure-Dome of Kubla Khan (in the orchestral version) and the Notturno für Orchester, 1919. These performances established Griffes as one of the major American composers of the time.

Griffes was a sensitive, modest, and somewhat shy man who often seemed aloof to those who knew him casually. However, he had a genuine interest in people, and the gift of establishing close and lasting friendships. His friends were impressed by his lack of pretence, his honesty, and delightful sense of humour which seemed to balance perfectly the more serious aspects of his personality. His interests were wide and varied, encompassing photography, delicately conceived watercolours, etchings and drawings. He loved the theatre and was fascinated by the colour and excitement of a circus or parade.

Griffes’s early works are strongly influenced by German Romanticism. His songs for voice and piano, with German texts are representative of this period. Although they are harmonically conservative and show the influence of both Brahms and Richard Strauss, they bear strong evidence of an intense sensitivity to text and mood, an uncommon melodic gift, skill in creating appropriate and effective accompaniments, rhythmic vitality, and exquisite and refined workmanship – all of which Griffes developed to perfection in his later works. 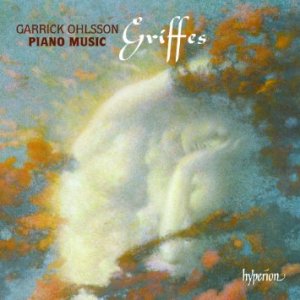 In about 1911 Griffes began to abandon the German style. The works written from then until about 1917 are highly coloured, free in form, and generally reflect many other elements of musical Impressionism. The piano pieces, for example, are pictorial and employ descriptive titles and/or poetic texts (e.g. Three Tone-Pictures and Roman Sketches). But as often as not Griffes added the texts and titles after he had completed the works. Impressionistic moods are established by gliding parallel chords, whole-tone scales, augmented triads, ostinato figures across the bar-line, and other devices. Of the songs from this period, the Tone-Images and Four Impressions most clearly reflect Griffes’s brand of Impressionism. The Three Poems op.9, on the other hand, are extremely dissonant, tonally obscure, and stylistically experimental.

In November 1916 and 1917 Griffes composed settings of five oriental poems for voice and piano, based on five- and six-tone scales. Published in 1917 as Five Poems of Ancient China and Japan op.10, they were the first works in Griffes’s ‘oriental’ style. Among the artists who were important to this aspect of his career were the Ballets Russes dancer Adolf Bolm, the Japanese dancer and pantomimist Michio Ito and the soprano Eva Gauthier. Gauthier spent several years in the orient, and she gave Griffes some Japanese melodies which she had copied in Japan. These he used for Sho-jo, a Japanese pantomime in one scene, commissioned by Bolm for the Ballet-Intime and featuring Ito. He achieved an oriental effect in Sho-jo through the use of harmonies that suggest quarter-tones, a delicate orchestration, and the use of muted strings which serve as a neutral tinted background like the empty spaces in a Japanese print. In 1917 Griffes prepared the imaginative and colourful orchestral version of his best-known oriental work, The Pleasure-Dome of Kubla Khan (originally written for piano).

The late Piano Sonata, (1917–18), is one of Griffes’s most powerful and striking works. It shows him at the peak of his creative power and is a complete break from the style and approach of his earlier works: not only is it uncompromisingly dissonant, but it is absolute music with no imagery intended, no poetic programme, and no descriptive title; moreover, unlike the earlier works for piano, which were rhapsodic one-movement forms, it is cast in three movements with the two outer movements in recognizable sonata structure. The Three Poems of Fiona MacLeod (1918) represent Griffes at the climax of his achievements as a composer of art songs. The style distinctly resembles that of the sonata in the use of disjunct melodic shapes and sharp dissonances, the harmonic treatment, and the boldness of conception.

The Three Preludes for piano (1919), Griffes’s last completed works, mark yet another turn in his brief career in the search for a musical language which would best express his individuality. They retain the abstract harmonic language of the sonata but represent him as a miniaturist writing within the confines of 32 bars or less. At the time of his death he was working on a festival drama for the Neighborhood Playhouse based on texts of Walt Whitman, Salat au monde.  (Donna K. Anderson. “Griffes, Charles T..” Grove Music Online. Oxford Music Online. Oxford University Press. Web. 17 Sep. 2015.)

One thought on “The Pleasure Dome of Charles Tomlinson Griffes”