“To hear composers take my work and take it seriously… it’s a thrill.”
– Stephen Sondheim

Both an homage and a celebration, Liaisons makes the case for Sondheim as one of the 20th century’s most influential composers – as at home in the concert hall as on the Broadway stage. It is also an expression of de Mare’s versatility and renowned commitment to contemporary composers: the Project’s roster spans the worlds of classical, jazz, opera, pop, musical theater and film. Composers hail from seven different countries and range in age from 30 to 75, representing more than 34 Pulitzers, Grammys, Tonys and Academy Awards. 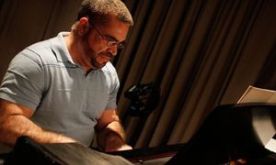 De Mare started with a core list of artists that grew as the project progressed, with additional input from Mr. Sondheim and producer Rachel Colbert.

“We wanted a roster that was diverse and intriguing, including composers who aren’t associated with “musical theater”, and we felt it was important to invite emerging composers alongside the established ones.  We capped the number at 36, in part because it lends itself well to concertizing (three programs of 12). Our final list ranges in age from 30 to 75, represents seven different countries, and encompasses 44 Grammy, Tony, Pulitzer, Emmy and Academy Awards.”

Andy Akiho Into the Woods
Mason Bates  Very Put Together (after Putting It Together)
Eve Beglarian Perpetual Happiness (after Happiness)
Derek Bermel Sorry-Grateful
Jherek Bischoff Ballad of Guiteau
William Bolcom A Little Night Fughetta (after Send in the Clowns/Anyone Can Whistle)
Jason Robert Brown Birds of Victorian England (after Green Finch and Linnet Bird)
Kenji Bunch The Demon Barber (after The Ballad of Sweeney Todd)
Mary Ellen Childs Now (Now/Later/Soon)
Michael Daugherty Everybody’s Got the Right
Peter Golub A Child of Children and Art
Ricky Ian Gordon Every Day a Little Death
Annie Gosfield A Bowler Hat
Jake Heggie I’m Excited. No, You’re Not. (after A Weekend in the Country)
Fred Hersch No One is Alone
Ethan Iverson Send in the Clowns
Gabriel Kahane Being Alive
Phil Kline Paraphrase of Someone in a Tree
Tania Leon going… gone (after Good Thing Going)
Ricardo Lorenz The Worst [Empanadas] in London (after The Worst Pies in London/A Little Priest)
Wynton Marsalis That Old Piano Roll
Paul Moravec I Think About You (after Losing My Mind)
Nico Muhly Color and Light
John Musto Epiphany
Thomas Newman Not While I’m Around
David Rakowski The Ladies Who Lunch
Steve Reich Finishing the Hat – Two Pianos
Eric Rockwell You Could Drive a Person Crazy
Daniel Bernard Roumain Another Hundred People
Frederic Rzewski I’m Still Here
Rodney Sharman Notes on Beautiful (after Beautiful)
Duncan Sheik Johanna… in Space
David Shire Love is In the Air
Bernadette Speach In and Out of Love (after Liaisons/ Send in the Clowns)
Mark-Anthony Turnage Pretty Women
Nils Vigeland Alma Mater/Merrily We Roll Along

“Send in the Clowns,” from the show A Little Night Music, may be his most famous work — and yet you might not recognize the song as reimagined for solo piano by Ethan Iverson of the band The Bad Plus.

Ethan Iverson – Send in the Clowns

One thought on “Liaisons: Re-Imagining Sondheim from the Piano”