Although Mieczysław Weinberg spent most of his life in the Soviet Union and was somewhat “appropriated” by the local music community, he considered himself a Polish Jew. He was born in Warsaw in 1919. His family came to Poland from the territory of the present-day Moldova and settled down in the city, whose population, at that time, was one-third Jewish. Mieczysław Weinberg received good musical education and embarked on a brilliant career as a pianist. Famous pianist Józef Hoffmann offered to help him enter the prestigious Curtis Institute of Music in Philadelphia, but their plans were foiled by the outbreak of the World War II.

The future composer fled Poland and found refuge in the USSR. Although he managed to avoid death in a concentration camp, he suddenly found himself with no family or friends, no shelter or resources. It is unclear when or how Mieczysław Weinberg found the truth about the death of his parents and sister who were murdered in the Trawniki concentration camp. It is known that the Holocaust hurt Weinberg in a myriad of ways – not only because it cruelly robbed him of his family, but also because it made him struggle with the randomness of his fate until the end of his life. Until his last days he dealt with the questions of why it was he who survived and how to justify it.

The 1940s were not an easy time for Weinberg. In 1946 he was hit (although not as hard as Shostakovich) by the so-called Zhdanov Doctrine, developed by the Central Committee Secretary Andrey Zhdanov – a ruthless man blinded by the Stalinist ideology. Zhdanov was adamant to cleanse art of any Western influences and restrain it to fit propaganda purposes, ordering that the literary, visual and musical works be simple, joyful and understandable to any, even the most primitive recipient; it was to glorify the new policy of the Party and the “Great Leader” Stalin. In 1946, at the October congress of the USSR Union of Composers, Mieczysław Weinberg was criticized for “an excessive concern for form at the expense of melodic ideas”. The composer humbly acknowledged the new resolutions and soon he composed the orchestral suite Festive Scenes, dedicating it to the 30th anniversary of the October Revolution. In 1948, further Party resolutions were announced, strictly regulating the conditions of creating new music and condemning any “formalistic” endeavors (the term “formalism” was in fact applied to describe any expression of artistic uniqueness). Composers were instructed to denounce their colleagues, spread accusations, intrigue and lies.

Sonata No. 4 for violin and piano, Op. 39, dedicated to the great violinist Leonid Kogan, was written shortly after Andrey Zhdanov announced his decree in 1947. However, Sonata No. 4 is much less melodious and its construction is much less classical than Sonata No. 3 and Piano Trio, composed in the same year, or Sonatina, which was written two years later. It does not contain the reflection of folk music, and is characterized by a strong musical language, which to some extent alludes – especially harmonically – to Olivier Messiaen’s Quatour pour le fin de temps (it is unknown if the similarity was intentional and if Weinberg, indeed, could have heard Messiaen’s piece, which was composed in 1941).

Sonatina Op. 46 was created in 1949 and is dedicated to Weinberg’s friend – composer Boris Tchaikovsky. Although the work seems to comply with Andrey Zhdanov’s demands (of creating simple, approachable pieces inspired by folk music), but it received its premiere six years later, on October 9th 1955 in the Grand Hall of Moscow’s State Conservatory, performed by Leonid Kogan and Andrei Mytnik. The Sonatina is abundant in beautiful melodies and melodiousness; it has broad phrasing and an illustrative character. In the initial segment of the second movement, one can hear subtle echoes of Jewish music, as well as folk tunes from the territories of the former Bessarabia (Weinberg’s family originally came from the area of today’s Moldova).

Sonata No. 5 for violin and piano was created in the significant year of 1953 as Op. 53. Weinberg composed it soon after he was released from the Lubianka prison and dedicated it to his friend Dmitri Shostakovich. The work received its premiere December 30th 1955, performed by violinist Mikhail Vaiman and pianist Maria Karandashova. In many respects, the Sonata seems to be the best and the most mature work from all of Weinberg’s pieces for violin and piano. It is also the grandest – constructed in an almost symphonic way. It comprises in four movements: Andante con moto, Allegro molto, Allegro moderato and Allegro. Similarly to Sonata No. 4, the two instruments parts are equally demanding, however in this case it is mostly the piano that carries the solo fragments. Once again, Weinberg’s attachment to drawing from the tradition of Russian, Polish and Jewish music plays a role, as well as his predilection for classical means of performance. This sonata is, however – not only because of its almost monumental size – a masterpiece where one can hear “Weinberg – the symphonist”. The piano’s thick, multi-faceted texture, its thematic richness, numerous transformative fragments, as well as the clear and logical – almost classical – four-movement construction prove the unusual dimension of this masterpiece. 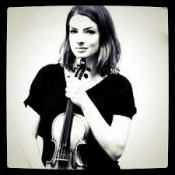 Maria Sławek and Piotr Różański have been performing as a duo since 2007. They studied chamber music under the guidance of Janina Romańska-Werner at the Academy of Music in Cracow. During various master classes they were tutored by artists such as Paul Badura-Skoda, Daniel Stabrawa, Marek Moś and Dora Schwarzberg. They attended many festivals, including the Mozartiana Festival in Gdańsk, the “Wawel Royal Castle at Dusk” Festival, the “Music in Old Cracow” Festival and the Emanations Festival in Cracow and in Sucha Beskidzka. In 2012 they were invited by the Kosciuszko Foundation to give a recital in New York City. The same year they released their debut album with sonatas by

Schumann and Prokofiev (Grupa Twórcza Castello) which received favorable reviews and was presented on air at Polish Radio Channel 2. In 2013, accompanied by the Polish Radio Symphony Orchestra under the baton of Marek Moś, they were part of the premiere performance of Anna Zawadzka-Gołosz’s piece Spettro, registered and released as part of an album dedicated to the work of the composer (Polish Radio). Also in 2013, they performed in the Karol Szymanowski Museum in the “Atma” Villa during a concert celebrating the composer’s 131st birthday.

Honor tradition and express his fascination with modernism – this is how, in short, one can characterize Mieczysław Weinberg’s style. It is possible that art which tries to meet the requirements of the two seemingly opposite artistic traditions, is doomed from the start to incomprehension and criticism. For many years Weinberg’s art was treated as something referential and anachronistic. From the 1960s to the 1990s, classical music underwent rapid changes with regards to discovering technical possibilities in the electronic, sonoristic and formalistic experimentations, and the emergence of performance. It is, therefore, no wonder that Weinberg’ music did not fit the modern world in the slightest.

In the recent years there have been a rise in the interest in this great composer’s work – his pieces are being performed on international stages and a growing number of recordings of Weinberg’s music appear every year.