Joe Henderson (April 24, 1937 – June 30, 2001) was an American jazz tenor saxophonist. In a career spanning more than forty years Henderson played with many of the leading American players of his day and recorded for several prominent labels.

After being discharged from the army he traveled to New York and sat in at Birdland with Dexter Gordon and other local musicians. During one of these sessions he was introduced to the trumpeter Kenny Dorham who was so impressed by his musicianship that he arranged for Joe Henderson’s first recording session as a leader with Blue Note Records. This resulted in the record Page One (1963) which to this day remains one of his most critically acclaimed albums. This recording also spawned the standard “Blue Bossa”. 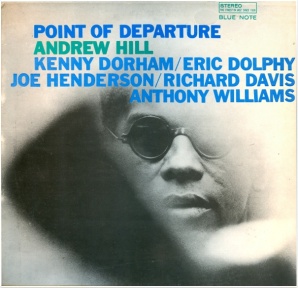 During the following four years he led 4 other sessions for Blue Note and recorded as sideman on over to 2 dozen albums for the same label. Some of these records are today classics of not only the label but also of jazz music. Andrew Hill’s Point of Departure, Larry Young’s Unity, Horace Silver’s Song For My Father and Lee Morgan’s Sidewinder are just a few examples of those fruitful years. In addition to creating timeless music Joe Henderson’s style also evolved during this period to incorporate all genres of jazz from hard bop to avant garde from latin to soul-jazz.

Mr. Henderson entered jazz at a fertile moment, when a few ambitious, challenging albums, like John Coltrane‘s My Favorite Things  and Miles Davis‘s Kind of Blue had broken through to a wide audience. A new self-possessed intellectualism was widespread in black music, and the experimental and traditional factions hadn’t yet hardened their positions.

Henderson appeared on 34 Blue Note albums between 1963 and 1990, alongside some of the most creative musicians in American jazz – including McCoy Tyner, Elvin Jones, Chick Corea, Ron Carter and Al Foster. But 1985 was re-emergence year for this often overlooked artist. He played with Herbie Hancock, Ron Carter and Tony Williams at the televised concert, One Night With Blue Note (the re-launch of the famous Blue Note label), and also recorded the adventurous double-set, The State Of The Tenor, alongside Carter and Foster.

In the early 1990’s he signed a new contract with Verve, which led to three Grammys. Lush Life, from 1991, used Billy Strayhorn tunes. With its first-rate playing and narrative arc — it began with a duet, expanded to a quintet and ended with a saxophone — the recording re-introduced Henderson to a new generation of jazz fans and saw him realize his most successful sales.  So Near, So Far (Musings for Miles), a treatment of pieces associated with Miles Davis; Double Rainbow, an album of Antonio Carlos Jobim‘s music; and Gershwin‘s Porgy and Bess, recorded with an all-star jazz lineup as well as the pop singers Sting and Chaka Khan.