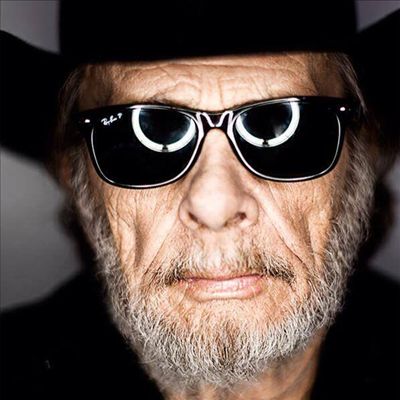 I wrote the following article earlier today before it was announced that Merle Haggard had died.  Very, very sad loss.  He was one of a kind and a songwriter and musician of unparalleled excellence.

“Merle Haggard has always been as deep as deep gets,” Bob Dylan told Rolling Stone in 2009. “Totally himself. Herculean. Even too big for Mount Rushmore. No superficiality about him whatsoever. He definitely transcends the country genre. If Merle had been around Sun Studio in Memphis in the Fifties, Sam Phillips would have turned him into a rock & roll star, one of the best.”

His obituary in Rolling Stone Magazine.

Waylon’s gone. Cash has been laid to rest. But Merle Haggard stands as country’s remaining black-hat rebel, the last man singing for the underdog.  Today is his birthday, and while he is still recording and performing, his health at age 79 has been a subject of some concern for his family and doctors.

Following his doctor’s advice Merle Haggard canceled his April concerts. This country music legend has been suffering from a recurring bout of double pneumonia.  This news follows the cancelations of several shows in March, as well, due to illness. Haggard admits his family wants him to stop touring, so that he can stay rested and healthy. But the road is an addiction he is just not willing to quit.

“I can’t.  I feel it’s a double-edged sword. It’s what keeps me alive and it’s what fucks up my life. It’s hard to have a family, so I try and split it up. I try to build a life here of a reasonable sort, and then go and jump on the bus. . . It’s like the old saying: ‘You want to make God laugh, tell him your plans.'”

Merle Ronald Haggard (born April 6, 1937) is an American country and Western songwriter, singer, guitarist, fiddler, and instrumentalist. Along with Buck Owens, Haggard and his band The Strangers helped create the Bakersfield sound, which is characterized by the unique twang of Fender Telecaster and the unique mix with the traditional country steel guitar sound, new vocal harmony styles in which the words are minimal, and a rough edge not heard on the more polished Nashville sound recordings of the same era.

Not all of his greatest songs dealt with troubles—he has written with majesty about love and dignity and gratitude and pride and standing up for what you believe in—but trouble and heartache certainly felt like his most natural neighborhoods: how life is hard, how hearts break easier than they mend, and how it sometimes seems as though everything but loneliness will abandon you, of anger looking for its rightful home, of wanting to stay but knowing there’s something just as deep within a certain kind of man that forever tugs at him to leave.

When Haggard first became famous, in the ’60s, he was best known as the man who sang songs about wanderers, fugitives, and the terminally luckless.

“I hate to be that easy to figure out, but it’s probably true…. I sometimes feel like I’m standing up for the people that don’t have the nerve to stand up for themselves. I just enjoyed winning for the loser. I’d never been around anything except losers my whole life.”

Haggard has continued writing songs and releasing albums of new material.  As is also the case for Willie Nelson and Kris Kristofferson, two other master songwriters in their 70s and in the case of Nelson his 80s, this period is evidence of a rebirth of creativity as their star begins to wane.

Perhaps there’s a measure of defiance in the title of Merle Haggard’s 2010 album I Am What I Am, but it’s also a statement of plain fact: almost 50 years into a recording career, there’s no changing the fact that Hag is who is he is, and he’s comfortable in his own skin, broken-in but not worn-out, never pushing too hard but never coasting, either. Sometimes Haggard’s easy touch is too light, slipping into sleepiness, but the striking thing about I Am What I Am is its casual mastery, the subtle shading in his vocal phrasing can make his songwriting appear effortless. And to an extent, it is: Hag’s tending the same fields he has for years, sliding into swaying ballads, stepping it up for a bit of Western swing, tipping his hat toward Mexico, swinging through some Dixieland jazz, a love of railroads and family, spiking his sentimental, nostalgic streak with clear-eyed realism, always blurring the line between a late night in a beer joint and a Sunday afternoon picking on the porch. But like with any of Haggard’s great albums, much of the pleasure lies in the details, whether it’s the sly lyrical turns of phrase in his writing or in the suppleness of his performance, things I Am What I Am has in spades. It’s familiar enough to feel comforting on the first listen, resonant enough to sound better with each subsequent spin; it’s so true to Haggard’s essence that it could stand handsomely as his final album, an understated summation of where he’s been, but it’s made better by having no trace of self-conscious finality — this wasn’t constructed as a last word, but it’s just a reflection. 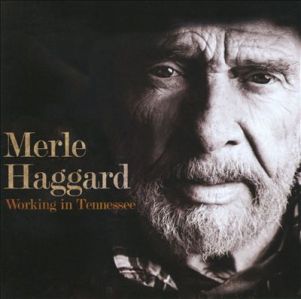 Working in Tennessee, Merle Haggard’s second album for Vanguard, plays a little slower and softer than 2010’s I Am What I Am, a record where Hag gently dwelled on his mortality. There are times where his age crosses his mind — particularly on “Sometimes I Dream,” where he casually lists off things that aren’t likely to pass his way again — but generally, he’s ready to “Laugh It Off” as he gripes about what’s playing on the radio, smokes a little dope, and enjoys playing a little bit of blues as he looks back to the past, even cutting a couple of old favorites (“Cocaine Blues,” “Jackson”) and a new version of “Working Man Blues.” Hag never rushes things, never turns up the volume, his western swing now bearing a closer resemblance to the gentlemanly amiability of Hank Thompson instead of the wild, woolly Bob Wills. He’s proceeding at the pace of a 74-year-old legend with nothing to prove, yet he’s not resting on his laurels, he’s just doing what he’s always done: singing songs so expertly his virtuosity almost goes unnoticed.

Willie Nelson and Merle Haggard first teamed up on record for Pancho & Lefty in 1983, a record released some 20 years after both singers began their careers. Back then, they were both hovering around 50, already considered old guys, but Django and Jimmie arrives 32 years after that record, when there’s no question that the pair are old-timers. Appropriately enough, mortality is on their minds throughout Django and Jimmie, a record whose very title is taken from Willie and Merle’s childhood idols. It’s a song that seems like a confession, as does the casual admission that they didn’t think they’d “Live This Long,” but neither Nelson nor Haggard wrote this, nor the title track or the album’s first single, the near-novelty “It’s All Going to Pot.” These are made-to-order originals by some of the best in the business — Buddy Cannon, Jamey Johnson, and Ward Davis wrote “It’s All Going to Pot,” Jimmy Melton and Jeff Prince the title track — and it shows how producer Cannon has a sharp ear for material, along with a way with a relaxed groove. That comfortable, familial atmosphere is one of the best things about Django and Jimmie and extends far beyond the marquee names; the studio pros, friends, family, and fellow travelers who support Willie and Merle help give this a warm, worn-in feel that’s appealing on its own terms. As comforting as the vibe is, it’s the singers and their songs that linger. Neither Nelson nor Haggard make any attempt to hide their age — Willie is a bit thinner than he used to be, Merle a bit growlier — and their age is affecting when they revisit songs from the past, whether they wrote them or not (Hag’s “Swinging Doors” is revived, as is the country standard “Family Bible” and Bob Dylan’s “Don’t Think Twice, It’s All Right”). This nod to the passage of time isn’t as explicit as “Live This Long” or “Missing Ol’ Johnny Cash,” where they bring in fellow survivor Bobby Bare to reminisce about their old pal. Often, country memories can get maudlin, but Willie and Merle are filled with good humor here and the pair often strike a delicate balance of fun and sweet melancholy which gives Django and Jimmie a soulful lift. Both singers are aware they’re approaching the twilight, but they’re not cursing the dark, they’re enjoying the sunset.

Ray Price succumbed to pancreatic cancer on December 16, 2013.  The following is the review of his 2007 recording with Willie Nelson and Merle Haggard.  Price’s last recording was the one he left his widow: a wonderful recording of her favorite songs, Beauty Is… The Final Sessions.

The title Last of the Breed speaks with a defiance that, for the most part, the music on this album does not, and that’s just as it should be — while Willie Nelson, Merle Haggard, and Ray Price are indeed among the last functioning practitioners of pure, unadulterated Western swing, honky tonk, or countrypolitan blues in the classic manner, on this album they seem less concerned with fighting the changing face of country music than with playing this music with the easy confidence and quiet conviction that’s been the hallmark of their respective careers. For the most part, Last of the Breed finds these three friends and occasional collaborators working through a set of old-school country classics (Haggard is the only member of the trio to bring any original material to the sessions, and delivers one of the album’s best performances on his new song “If I Ever Get Lucky”), and they treat chestnuts like “Heartaches by the Number,” “I Love You Because,” “That Silver Haired Daddy of Mine,” and “Pick Me Up on Your Way Down” with both strength and familiarity — these guys could probably sing these numbers in their sleep after all these years, but they also approach them like pros, realizing these old standards gained their status as classics because they endure and people love them, and they give them the respect and care that they deserve. Haggard is in fine voice on this set, and Nelson sounds good though his phrasing occasionally lags behind the melodies a shade more than is comfortable. As for Price, time has added a slight wobble to his instrument, once one of the most impressive in country music, but he still projects a dignity and commendable emotional warmth, and when he joins voices with his pals Willie and Merle, it’s a stirring reminder of just how much these artists still have to offer. Legendary producer Fred Foster supervised these sessions, with a band of seasoned Nashville veterans backing the singers (and the Jordanaires adding harmonies on several numbers), and at its best Last of the Breed really sounds the way these things did in the old days, and Nelson, Haggard, and Price achieve something more than nostalgia — they offer a stirring reminder of the strength of this music when country music spoke to something deeper than just a marketing demographic.