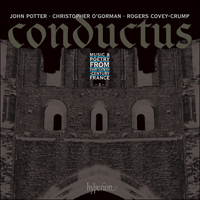 A couple of recent and noteworthy recordings from Hyperion: more Machaut by The Orlando Consort, and the final installment from John Potter, Christopher O’Gorman and Rogers Covey-Crump, of the Conductus genre, the first experiments towards polyphony—the kind of sound we associate with Pérotin.

Formed in 1988 by the Early Music Network of Great Britain, The Orlando Consort rapidly achieved a reputation as one of Europe’s most expert and consistently challenging groups performing repertoire from the years 1050 to 1550. Their work successfully combines captivating entertainment and fresh scholarly insight; the unique imagination and originality of their programming together with their superb vocal skills have marked the Consort out as the outstanding leader of their field.

Since joining the Hyperion family, The Orlando Consort has focused almost entirely on the music of Guillaume de Machaut, specifically, his secular songs.  A Burning Heart is the third collection of songs on the theme of courtly love.   The two other recordings are The Dart of Love and Songs from Le Voir Dit.  Throughout this series, the members of The Orlando Consort are proving the most committed of guides to the music and mores of fourteenth-century France.

The courtly element of medieval love-songs often baffles modern audiences with its constant insistence on honor and appropriate behavior on the one side, and the minimal contact or potential for a meaningful relationship between the protagonists on the other. Secrecy is often at the center of proceedings: not only must a relationship remain hidden from the rest of the world, even the beloved often remains in the dark concerning the lover’s feelings. An unanswered look—even if withheld with good intention for concealment’s sake—can kill a lover, especially as private conversation is impossible without offending the honor and worth of the beloved, these often being the very characteristics which caused the falling in love in the first place. Furthermore, in a supposedly religious and conservative age, the constant praising of extra-marital relationships in literature, poetry and music—despite their dangers and often calamitous outcomes—seems an unlikely preoccupation. Guillaume de Machaut’s situation in all this may seem even more precarious: while writing in the first person, neither his rather modest social origins nor his position as a cleric and canon at Reims cathedral would allow him to participate in such highly aristocratic and potentially sexual pursuits.

The conductus has always seemed like the poor relation in the history of music between the twelfth and the fourteenth centuries. Unlike its well-known siblings, the flamboyant organum and occasionally smutty motets, the conductus has remained in the shadows for much longer than its musical and poetic ambitions deserve. For the conductus is every bit as ambitious as its other family members; whether in terms of the complexity or sophistication of its poetry, or of the technical wizardry of some of its musical techniques, it is a genre to be reckoned with.

Even in terms of simple numbers, the conductus occupies an important place on the medieval musical landscape: there are slightly over 800 Latin poems with music copied between around 1230 and 1320, preserving a repertory composed between the 1180s and 1230s. Of these poems, 675 are set to music, and of these 377 are monophonic; 184 are in two parts; 111 in three parts; 3 in four parts. Three works have a doubtful generic profile, and 122 survive as texts or incipits alone. This is an immense repertory, and one that was spread far and wide. Manuscripts preserving the repertory are found from Scotland to the southern Rhineland, and from Spain to southern Poland.

Perhaps it is a number of uncertainties around the conductus that have resulted in its eclipse by other genres. Certainly there are difficulties with the rhythm of parts of the conductus that have led to a position where until relatively recently there has been no consensus as to how they would have been performed (more below), and even the function of the conductus—what it’s for—has been the subject of debate. Some have taken the term conductus to indicate some sort of processional context for the genre, and while it is just about conceivable that when the medieval procession stopped and made a station, singers might have sung a conductus, the more common idea that the works were sung while processing fits ill with the complexity of both their words and music. Others, for example, have taken the term conductus to have a meaning associated with ‘conduct’, and this fits well with the homiletic and moralizing tone of some of the poems. 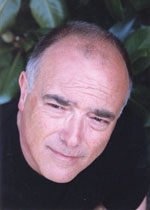 John Potter is involved with early music both as a researcher and performer, and has written extensively on the subject (focusing on historical performance reality); his four books on singing are published by Cambridge University Press and Yale University Press. In addition to the Conductus project, his recent ventures include an album with lutenists Ariel Abramovich and Jacob Heringman featuring songs by Campion, Sting, Tony Banks and John Paul Jones. He is a former British Library Edison Fellow and is Reader Emeritus in Music at the University of York, having left the university in 2010 to return to his portfolio of freelance projects. He was a member of The Hilliard Ensemble from 1984 to 2001 and a major contributor to the group’s Officium project, subsequently developing many of the ideas in The Dowland Project’s four albums for ECM. He also produced the first three ECM albums by the Scandinavian Trio Medieval. Red Byrd, the ensemble he founded with the bass Richard Wistreich, has made numerous records for Hyperion, and John has also contributed to many of the Paradise Regained series (ORF & Fra Bernardo) by the German ensemble The Sound & The Fury.

Christopher O’Gorman studied at the junior department of the Royal Academy of Music and then at the University of York, where he gained an MA in vocal studies with John Potter. As well as being an active performer of medieval music, he pursues a career both as a Songman in the Choir of York Minster and as an ensemble singer with a number of groups including the Gabrieli Consort, The London Quartet, The Binchois Consort, I Fagiolini, Ex Cathedra, Britten Sinfonia Voices, The Brabant Ensemble and the Ebor Singers. With these groups he has toured extensively in the UK, Europe and America. Performance highlights as an ensemble singer include singing in the first complete performance of Stockhausen’s final opera Mittwoch aus Licht with Ex Cathedra in Birmingham Opera’s production as part of the London 2012 Cultural Olympiad, and later repeated in the 2013 Proms season. He was also involved in Ex Cathedra’s collaboration with the Québécois dance company Cas Public in a choreographed performance of Duruflé’s Requiem.

Although a founder member of Gothic Voices and one of the six singers in the first British recording of Stockhausen’s Stimmung, Rogers Covey-Crump spent three decades as a core member of The Hilliard Ensemble, a male-voice quartet known globally for its performances and recordings of early music, and which also commissioned works from living composers and made the first recordings of the vocal works of Arvo Pärt. In 1994 the collaboration with saxophonist Jan Garbarek produced a unique artistic fusion in the highly acclaimed album Officium. Two releases followed in the wake of its success: Mnemosyne in 1999 and Officium Novum in 2010. Hundreds of live performances were given, spanning two decades. In 2008 the ensemble premiered a music theatre piece at the Edinburgh Festival, I went to the house but did not enter, by the German composer and director Heiner Goebbels. This was subsequently staged all around Europe, in the USA and in South Korea. The ensemble retired in December 2014 after a forty-one-year career.