Charlie Parr is an American country blues musician from Minnesota. He was born in Austin, Minnesota and spent part of his childhood in Hollandale. He started his music career in Duluth, Minnesota. His influences include Charlie Patton, Bukka White, Reverend Gary Davis, Dave Van Ronk, and Mississippi John Hurt. He plays a custom made Mule resonator, National resonator guitar, a fretless open-back banjo, and a 12-string guitar, often in the Piedmont blues style. He is married to Emily Parr, who occasionally adds vocals to his music.

Parr is a folk artist for the new American Dust Bowl, a resonator-ready troubadour armed with a well-worn satchel of troubled tales that cut to the heart of a nation mired in fear and in dire need of a roots-music revival.
— ACOUSTIC GUITAR

Most of his recordings to date have eschewed typical studio settings; he’s recorded in warehouses, garages, basements and storefronts, usually on vintage equipment, which

gives his work the historic feel of field recordings. It’s not because he wants to sound like he was discovered 75 years ago by Alan Lomax; it’s because most modern recording studios make the reticent and self-effacing Parr feel uncomfortable.

After a health scare a few years back, he lives very simply, no alcohol and a vegan diet, often cooking up his rice and beans on his engine manifold on the lonely, cross-country drives. He doesn’t go in much for fashion and frills and lives simply on the road, usually sleeping in his car.

Parr’s hardscrabble instincts come to him natually. His father came up on a tenant farm in northern Iowa with 17 siblings and rode out the Great Depression

on freight cars. He rode them to Appalachia and Texas and every other corner of the country. He finally settled into a job shoveling animal parts at the Hormel plant in Austin, Minn., where he got active in the union and met his wife.

For every song about a factory town, union battle, or soup line, Parr’s father had a story from his travels. Parr tried punk rock — Husker Du, the Minutemen and the rest. “Then my dad pointed out that The Clash was really just really loud folk music.

I resented that at the time, because I was trying to rebel.” He came quickly back to the folk and blues he came up on. “That’s always been the music that hits me right in the gut,” Parr says. “I have a visceral reaction to it.” 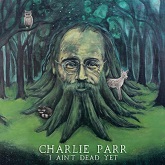 Parr’s latest recording is I Ain’t Dead Yet a 5-song EP on Red House (Dec. 2016) that captures Charlie’s blistering energy and features all but one new original.  The one cover being Parr’s reworking of the traditional tune “Old Dog Blues.”

The limited edition 10-inch record is on black vinyl and features cover art by the Duluth-based artist Shawna Gilmore.

Other recordings by Charlie Parr

Stumpjumper was Parr’s Red House debut and his first album featuring a backing band. Parr’s finger-picking and gritty vocals deliver his 11 originals as well as his take on the classic murder ballad, “Delia.”

Bookended by traditionals Parr learned from Dave Ray and Spider John Koerner, Barnswallow features eight new original songs recorded live to tape at The Winona Arts Center in Winona, MN. The city’s creative spirit is evident in the cover art by Jamie Harper (Salvaged Medium) and liner notes by Joe Tadie (Saint Mary’s University of Minnesota). Longtime collaborator Tom Herbers (Third Ear Studios) engineered and mastered the project. Equipped with his fretless banjo, Fraulini 12-string, and trademark National NRP wood-body resonator, Parr was joined in the studio by Mikkel Beckmen on washboard & percussion, Dave Hundreiser on harmonica & resonator mandolin, and Emily Parr who sang backing vocals on “Jesus is a Hobo.” The recording was done in a live performance style with no tracking and using first or second takes.