I really enjoy listening to music from the 13th-15th centuries.  This has been an interest of mine for almost as long as my love of music.  And I am told that often people who enjoy contemporary classical music also enjoy early music, and not much in between.  While that is not entirely true for me, I enjoy Bach and Haydn quite a lot, and recently I have even been finding Mahler and other late Romantics more listenable than I’ve felt in the past – still I could be happy, if I had to, without access to any music from 1600-1900.

The way I like to hear it most is by one voice per part groups (OVPP), all male if possible.

The first group like this I heard was The Hilliard Ensemble, a British male vocal quartet originally devoted to the performance of early music, founded in 1974.  The group has undergone many personnel changes, including the loss of the founding member Paul Hillier, and has also recorded (even premiered) contemporary music.  But one of their very best recordings is of music by William Byrd.

Most often Byrd masses are heard by a mixed chorus, with each voice doubled or more, which produces the standard choir sound.  Beautiful. However, if you have never heard this music performed by a OVPP ensemble, you have missed out on a phenomenal listening experience.  Done well, the polyphony is never clearer and each line can be imbued with the kind of emotional character solo singers routinely convey.  For this recording, Paul Hillier chose to transpose the music down in order to have it performed by male voices only.  A boy soprano was added to the Mass for Five Voices.  The Hilliard Ensemble has recorded music by all the major composers of this period, but I think they excel with English music.

Comprising six professional singers from five European countries, Cinquecento takes its name from the Italian term for the sixteenth century. The pan-European structure of the ensemble (its members are from Austria, Belgium, England, Germany and Switzerland) harks back to the imperial chapel choirs of the 16th century, whose members would have been chosen for their musicianship from Europe’s most prized musical establishments.

Formed in Vienna in October 2004 the ensemble has now established itself as one of Europe’s premier vocal sextets. The ensemble aims to bring the lesser known sixteenth-century choral repertoire from the courts of imperial Austria to a wider public, as well as performing a varied range of Renaissance polyphony with a view to illuminating to audiences the kaleidoscopic diversity of compositional styles operating within Europe over the period. Recent interest from modern composers has also seen the ensemble add a variety of contemporary works to its repertoire.

I recently bought six of their recordings but will spotlight this one: 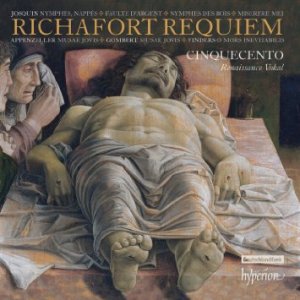 Richafort was a representative of the first generation after Josquin, and he followed his style in many ways. In some of his music he used fragments of Josquin’s compositions as a tribute. Richafort’s compositional techniques are typical of the period (smooth polyphony pervasive imitation, etc.) but he was unusually attentive to the clear setting of text so the words could be understood.

His requiem (1532) is written for six voices “in memoriam Josquin des Prez”.

Orlando Consort is another British OVPP male group that has been around for nearly thirty years.  They specialize in music from the mediaeval and renaissance, offering state of the art recordings of Machaut, Dufay and their lesser known contemporaries.  This is how they describe their repertory:

Our material spans a period of some 700 years, from the very beginning of western harmony to the early years of the renaissance. The programmes are based on a number of different themes individual composers, politics, geography, and religious festivals. Some deal with a specific period of years, while others trace the development of musical form through the centuries. The majority of programmes are of sacred music and often include one of the masses listed at the bottom of this page. In addition, the Orlando Consort has a considerable repertoire of secular material and is always delighted to prepare new repertoire to suit the needs and themes of particular festivals.

One of the defining characteristics of the group is the fact that we always collaborate with expert musicologists on the preparation of editions, the application of performance practice and also on drawing from them an understanding of the context of the music. All the recordings also benefit from this approach, and you’ll see the names of some of the people who have advised us on recent projects.

A recording I find very interesting is The Saracen & the Dove: Music from the Courts of Padua & Pavia around 1400. 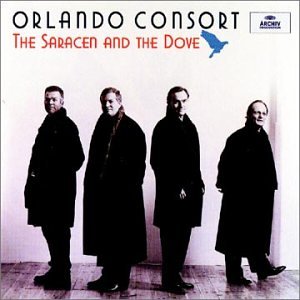 The music on this recording is an example of Ars Subtilior, which might be thought of the most experimental of the medieval period.  It is a highly refined musical style of the late 14th century, centered primarily on the secular courts of southern France, Aragon and Cyprus.  Aside from the growing contrapuntal independence of the contratenor, the style is notable for an admirable tonal and motivic cohesion.

Stimmwerck is a male classical music vocal quartet ensemble specializing in the rediscovery and reproduction of the music of little known renaissance composers of the German-speaking world.  Their name reflects the ensemble’s structure and purpose. “Stimmwerck” comes from a 16th-century German term often used (for example, by Michael Praetorius) for a group of instruments of the same type but of different ranges, similar to the English term “consort of instruments”. Thus, the ensemble is a “Stimmwerck” of classically trained male voices in varying ranges, attuned to one another in skill.

The focus of their work together is the bringing of forgotten or less well-known renaissance composers of early music in the German-speaking regions once again into public recognition.

A recording that is an exceptional example of their work is:

Leonhard Paminger was one of the most important of the early Lutheran composers who combined the style of Josquin’s successors with the native German style. He won international recognition early in his career and his works were included in French and Italian anthologies. Apart from a few German secular songs, his works consist mainly of settings of Latin antiphons, responsories, psalms, hymns and Propers, and German Protestant hymns. Most numerous among his works are the cantus firmus free motets, in which passages of free counterpoint alternate with imitative polyphony.

There are many many more recordings I could talk about, the world of early music is very large and I encourage everyone to venture outside your comfort zone and listen to early music.

Finding the recordings mentioned in this article:

The Saracen & the Dove: Music from the Courts of Padua & Pavia around 1400

They can also be found on most streaming services such as Spotify.