“I consider myself a classical guitar player, but I’m categorized as a folk musician,” John Fahey says ruefully in the new documentary In Search of Blind Joe Death—The Saga of John Fahey.

In true Fahey fashion, he speaks humbly while taking Occam’s Razor to his own complicated place in music history. One thing that Fahey hits on the nose, though, is how his instrumental playing and composing over the decades never settled into a single genre. Instead it’s an interstitial sound, instantly recognizable yet spanning everything from folk, blues, and Dixieland jazz to gamelan, avant-garde classical, and ambient noise. What never wavers is Fahey’s core: a languid-yet-intricate fingerpicking style that drones, descends, dances, and does all in its considerable power to synthesize a new archetype of American music, one that consciously embraces the culture’s polyglot essence. More immediately, it’s gorgeous. Lonesome and ghostly, Fahey’s playing evokes absence, strangeness, and space with a hymnal intimacy. (Jason Heller, Pitchfork)

John Aloysius Fahey (February 28, 1939 – February 22, 2001) was an American fingerstyle guitarist and composer who played the steel-string acoustic guitar as a solo instrument. His style has been greatly influential and has been described as the foundation of American Primitive Guitar, a term borrowed from painting and referring mainly to the self-taught nature of the music and its minimalist style. Fahey borrowed from the folk and blues traditions in American roots music, having compiled many forgotten early recordings in these genres. He would later incorporate classical, Portuguese, Brazilian, and Indian music into his œuvre. He spent many of his later years in poverty and poor health, but enjoyed a minor career resurgence with a turn towards the more explicitly avant-garde, and created a series of abstract paintings during the last years of his life. He died in 2001 from complications from heart surgery. In 2003, he was ranked 35th in the Rolling Stone “The 100 Greatest Guitarists of All Time” list. (Wikipedia)

Somehow I discovered John Fahey when I must have been no older than 16 or 17, which would have been around 1967 or 1968.  By this time the acoustic folk-blues trend had peaked and morphed into psychedelic electric blues best exemplified by Jimi Hendrix or bands like The Cream. 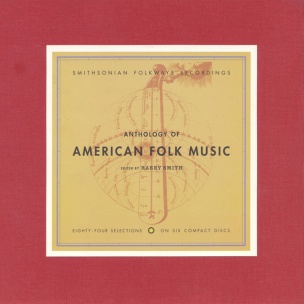 Harry Smith’s monumental 3-LP The Anthology of American Folk Music had come out in 1952 and almost single handedly launched the folk movement.  The music on the compilation provided direct inspiration to much of the emergent folk music revival movement. The Anthology made widely available music which previously had been largely the preserve of marginal social economic groups. Many people who first heard this music through the Anthology came from very different cultural and economic backgrounds from its original creators and listeners. Many previously obscure songs became standards at hootenannies and folk clubs due to their inclusion on the Anthology. Some of the musicians represented on the Anthology saw their musical careers revived, and made additional recordings and live appearances.

Artists such as Pete Seeger, The Weavers and others took their inspiration from the music on the Anthology, which collected in one place a rich compendium of rural, mostly Southern folk, blues and country music recordings that were originally issued from 1927 to 1932.  Bob Dylan would also be greatly influenced by these recordings.

I immediately recognized John Fahey as another example emerging from this rich source material, but also evident was a stream-of-consciousness, an almost Dada-esque, quality to what he was doing.  His music very intriguing to me and I bought every recording of his I could find.

One of acoustic music’s true innovators and eccentrics, John Fahey was a crucial figure in expanding the boundaries of the acoustic guitar. His music was so eclectic that it’s arguable whether he should be defined as a “folk” artist. In a career that saw him issue several dozen albums, he drew from blues, Native American music, Indian ragas, experimental dissonance, and pop. His good friend Dr. Demento has noted that Fahey “was the first to demonstrate that the finger-picking techniques of traditional country and blues steel-string guitar could be used to express a world of non-traditional musical ideas — harmonies and melodies you’d associate with Bartok, Charles Ives, or maybe the music of India.” The more meditative aspects of his work foreshadowed new age music, yet Fahey played with a fierce imagination and versatility that outshone any of the guitarists in that category. His idiosyncrasy may have limited him to a cult following, but it also ensured that his work continues to sound fresh.

Fahey was a colorful figure from the time he became an accomplished guitarist in his teens. Already a collector of rare early blues and country music, he made his first album in 1959, ascribing part of it to the pseudonymous “Blind Joe Death.” Only 95 copies of the LP were pressed, making it a coveted collector’s item today. (In the 1960s, Fahey would re-record the material for wider circulation.) In college, he wrote a thesis on Charley Patton (an exotic subject at the time). Yet Fahey did not perform publicly for money until the mid-’60s, after his third album. (Allmusic Biography by Richie Unterberger)

After eschewing the rustic trappings of his earliest music for a series of highly experimental recordings — including the musique concrete eye-opener Requia and Other Compositions for Guitar Solo — Fahey began trying on and discarding various musical garments. He honed his steel-string playing, working with Dixieland musicians and venturing deeper into minimalism, the latter of which showed up in the music he recorded for the art-house staple Zabriskie Point.

None of this, suffice to say, made John Fahey a household name. Forced to sell Takoma’s assets to Chrysalis Records in the mid-Seventies, he retreated from the music business and fell into deep emotional and financial distress. Subsisting on sales of musical rarities — including his own — he was missing in action for more than a decade until an early-Nineties boom of interest from fans such as Glenn Jones of the Boston band Cul de Sac, who toured and recorded with Fahey in recent years.

“His music was and is as important to me as any I’ve ever heard,” says Jones, who admits that recording The Epiphany of Glenn Jones with Fahey was not the simplest task. “Like a lot of people, I made the mistake of heroicizing John, confusing the man with the music. But, thanks to John, I got past that, and I came to love the man too.” (Rolling Stone)

Mr. Fahey studied philosophy at American University in Washington and then at the University of California in Berkeley, where he played at folk clubs in his first paid engagements. In 1963, he recorded his second album, ”Death Chants, Breakdowns and Military Waltzes.” He and his partner in Takoma Records, ED Denson, tracked down two Mississippi bluesmen, Bukka White and Skip James, and recorded them for Takoma, bringing them to new audiences on the folk-revival circuit.

Mr. Fahey entered a graduate program in folklore at the University of California at Los Angeles in 1964, and wrote his master’s thesis about the Delta bluesman Charley Patton. After he received his degree, Mr. Fahey turned to music full time.

His compositions expanded, embracing the modalities of raga along with dissonances not found in country or blues; he used unconventional tunings and turned some traditional picking patterns backward. He also experimented with tape collages, often to the annoyance of folk fans. Though hippie listeners may have heard his music as psychedelic, he was a bourbon drinker.

Along with his Takoma releases, Mr. Fahey also made albums for Vanguard and Reprise Records. His pristine 1968 solo album of Christmas songs for Takoma, ”The New Possibility,” sold 100,000 copies initially and has been perennially reissued. Mr. Fahey spent time at a Hindu monastery in India; a 1973 album of extended solo pieces, ”Fare Forward Voyager” (Takoma) is dedicated to a guru. Takoma was sold to Chrysalis Records in the mid-1970’s, and in the 1980’s Mr. Fahey made albums for the Shanachie and Varrick labels. New age performers like the pianist and guitarist George Winston, who made his first album for Takoma, prospered with a more ingratiating solo-guitar style. (Jon Pareles, John Fahey, 61, Guitarist And an Iconoclast, Is Dead”, The New York Times, February 26, 2001)

His old fans barely recognized the odd creature on stage at the Empty Bottle.  At 57, Mr. Fahey is puffy, and his white beard and sunglasses hide his face.  He finished a blues dirge by simply coming to a stop and shrugging.  His new fans are used to being puzzled; this was a young, intellectual audience who knew that Soundgarden was playing in an arena across town but were too hip for that.  It is Mr. Fahey’s moment as he rides back into view as an avant-garde father figure, whom the guitarist Thurston Moore of Sonic Youth has acknowledged as a “secret influence.”  John Fahey’s music is conceptually slippery, belonging to no genre. 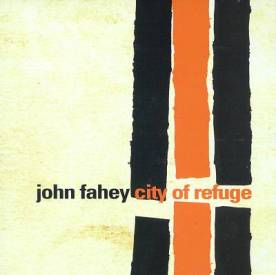 Musicians within folk, neo-acoustic blues, New Age and now, strangely enough, post-everything avant-garde rock have claimed him as an inspiration. A couple of articles by the rock critic Byron Coley — a 1994 Spin magazine profile and an entry on Mr. Fahey’s work in the recent Spin Alternative Record Guide — sparked new interest.  Mr. Fahey began getting calls from record companies and musicians, and now he finds himself, to his amusement, the object of much attention.

His new album, “City of Refuge,” (Tim/Kerr/ Mercury), opens with recordings of trains and works through fuzz-charged blues figures and quiet melodies that slowly expand as they repeat.   Over the years, he has cut away some of his old sentimentality, and this record is as stubbornly idiosyncratic a statement in music as can be heard; he may be best understood in the same category of self-inventing American composers as Charles Ives and Brian Wilson. (Ben Ratliff, “A 60’s Original With a New Life on the Fringe”, The New York Times, January 19, 1997 (reprinted in Acoustic Fingerstyle))

Relatively late in life, Fahey extended his so-called American Primitive approach beyond music, and into the creation of a substantial body of paintings created in makeshift studios in and around Salem, Oregon. Painting on found poster board and discarded spiral notebook paper, working with tempera, acrylic, spray paint, and magic marker, Fahey’s intuitive approach echoes the action painters and abstract expressionists. The same alluring and tranquilizing aesthetics that defines much of Fahey’s musical output are equally present in his paintings.

The first publication focusing on his visual output, John Fahey: Paintings, edited in collaboration with Audio Visual Arts (AVA), is illustrated with 92 plates and is accompanied by essays from Keith Connolly, founding member of No-Neck Blues Band, and the critic Bob Nickas. 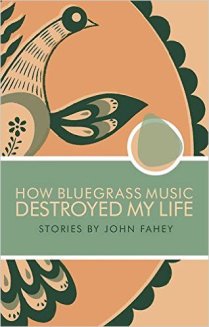 John Fahey remained an explorer and an iconoclast to the end, even publishing a few volumes of semi-autobiographical writings, including the wonderfully titled How Bluegrass Music Destroyed My Life. His final album, Red Cross, was posthumously released in 2003 following his death during heart bypass surgery two years earlier, aged 61. It’s a mixed bag but there are some drifting, ghostly electric pieces that are haunting, even elegiac. Since then, the Dust to Digital label have released Your Past Comes Back to Haunt You: the Fonotone Years 1958-1965, an illuminating, brilliantly annotated five-CD box set of his early work and another testament to his singular talent.

John Fahey incorporated influences ranging from folk, blues, and bluegrass to classical music, musique concrete, and noise in his primarily acoustic guitar-based compositions. Considered a legend by many, Fahey released upward of three dozen LPs in his lifetime.