“I am not an instrument-maker, but a philosophical music-man seduced into carpentry.”

American composer Harry Partch (1901-1974) had a musical vision for which 12-toned instruments were not enough. His objection to the standard western classical scale wasn’t so much along the philosophical lines of Schoenberg and other early 20th-century atonalists; he was mainly frustrated by the musical limitations of the equal-tempered octave, so devised a system that split the octave into 43 notes instead.

When he was 28, Partch burned all his compositions and began a hitchhiking trip to Chicago, which became a 10-year trek around the country as a hobo. He documented his journey, compiling his observations in Bitter Music, a published collection of his journals, essays, and other writings.

Partch’s music can sometimes sound almost embarrassingly gauche and simple. If your first encounter with Partch was with US Highball, which recounts his experiences as a hobo living in federal work camps during the Great Depression, you might think you’d stumbled across a folk singer with a strangely out-of-tune guitar.

Listen to Partch’s later works, though, such as Castor and Pollux, and that impression of out-of-tuneness dissolves into a feeling that you’ve entered a strange and somehow ancient-seeming musical world, with its own laws. Partch laboured to create new tuning systems based on the pure intervals of the ancient Greeks.[i]

Partch’s masterpiece is the bizarre 1960s music drama Delusion of the Fury. It is outlandish and magnificent and it spits you out wanting to dive back in and experience the whole strange thing again. And if it is hardly ever staged that’s because it can’t be: it requires its very own orchestra of hand-built instruments, each one specially invented by Partch to play his unique microtonal music.[ii] 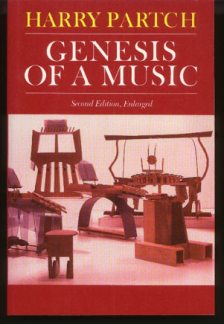 Partch made public his theories in his book Genesis of a Music (1947). He opens the book with an overview of music history, and argues that Western music began to suffer from the time of Bach, after which twelve-tone equal temperament was adopted to the exclusion of other tuning systems, and abstract, instrumental music became the norm. Partch sought to bring vocal music back to prominence, and adopted tunings and scales he believed more suitable to singing.[iii]

Inspired by Sensations of Tone, Hermann von Helmholtz’s book on acoustics and the perception of sound, Partch based his music strictly on just intonation. He tuned his instruments using the overtone series, and extended it past the twelfth partial. This allowed for a larger number of smaller, unequal intervals than found in the Western classical music tradition’s twelve-tone equal temperament. Partch’s tuning is often classed as microtonality, as it allowed for intervals smaller than 100 cents, though Partch did not conceive his tuning in such a context.[iv] Instead, he saw it as a return to pre-Classical Western musical roots, in particular to the music of the ancient Greeks. By taking the principles he found in Helmholtz’s book, he expanded his tuning system until it allowed for a division of the octave into 43 tones based on ratios of small integers.[v]

There are three main types of microtonal scales. One is equal temperament, where the octave is divided into equal steps of various numbers, with nineteen, twenty-two, thirty-one, and fifty-three divisions (notes) offering the best overall possibilities. A scale of twelve equal divisions is, of course, the common Western scale in use today by 99.9% of all musicians. A scale of twenty-four tones is the quartertone system which includes the ordinary twelve scale within it. This is used by some 20th century classical composers. Equal tempered is the scale most easily achieved by analog synthesizers and refretted instruments such as guitars. As was been shown by the late Ivor Darreg, the most ardent explorer and publicizer of this field, each non-12 scale has its own “mood,” and as such provides new avenues of expression for the creative composer.

Well temperament is basically a compromise between equal temperament and just intonation. Not every interval is represented exactly, but neither are the steps between notes equal in value as in equal temperament. Some keys might be perfectly in tune while others may be mistuned from the perfect ratios.

The other main type of scale is just intonation; this is the sort that Partch explored extensively and delineated in his music. Here exact harmonic ratios determine the unequally spaced note values. After unity (the same note in duet) the simplest harmonic ratio between two tones is the octave (2/1), followed by the fifth (3/2 – closely approximated on the twleve-tone system). However, many other important ratios are not analogous to notes found in twelve-tone or any equal temperament system. Whereas an equal tempered scale only approximates certain select harmonic ratios, in just intonation the ratios are exact and chords, for example, are sharp and clear as opposed to the “fuzziness” of equal temperament. The ratios can be taken as far as one wants, becoming more dissonant as they become more complex. With a few exceptions, Partch stopped at divisions of eleven. Partch used a total of fourty-three tones per octave, though with just intonation it was not necessary for every instrument to contain every note, but only those most suitable. Just intonation usually requires that new instruments be built for its exploration; such scales on fretted instruments are difficult, and analog synthesizers (which can achieve equal temperament with a simple control voltage processing device) need modifications to the actual keyboard circuitry.

If one considers the amount of music composed for the Western twelve-tone scale, and realizes that there are three or four other equal tempered scales that are just as valid harmonically, the potential for these scales becomes obvious. Consider also that “mediocrity” is a concept determined mostly by excessive repetition; that every “banal” melody you have ever heard was classified so by its unoriginality. With either type of microtonal scale, new melodies and harmonies are inevitable. Yet it remains that these scales have been completely ignored by the majority of “progressive” and “experimental” musicians of today. Whether this will continue to be so is unknown, but I believe that this resource can provide new opportunities for musicians who wish to retain tonal and harmonic elements in their music, yet who are dissatisfied with the possibilities of the twelve-note scale that engulfs us all. For as Partch wrote:

“Music, ‘good’ or not ‘good,’ has only two ingredients that might be called God-given: the capacity of a body to vibrate and produce sound and the mechanism of the human ear that registers it. These two ingredients can be studied and analyzed, but they cannot be changed; they are the comparative constants. All else in the art of music, which may also be studied and analyzed, was created by man or is implicit in human acts and is therefore subject to the fiercest scrutiny – and ultimately to approval, indifference, or contempt. In other words, all else is subject to change.”[vii]

Opportunities to hear him have been exceedingly rare. Partch is so far outside the boundaries of even the experimental and avant-garde movements, that seeing a performance can be its own reward, especially as the music is so unusual that it might easily be impossible to comprehend.

That is the context for Ensemble Musikfabrik’s production of Partch’s theater piece Delusion of the Fury, directed by Heiner Goebbels, which was performed at City Center in July, 2015, as part of the Lincoln Center Festival. The production is so engrossing, and expresses the music in such a natural way, that it can speak to anyone with an interest in music theater.

Delusion of the Fury is one of Partch’s most substantial works. In two acts separated by an interlude he titled Sanctus, the piece presents two allegories, one ancient and one modern. The first is a Noh-based story of a man seeking penance for murder, confronted by the ghost of his victim. The second is about a misunderstanding and dispute between two strangers, who are sent before a judge.[viii]

Partch met Danlee Mitchell while he was at the University of Illinois; Partch made Mitchell his heir,[ix] and Mitchell serves as the Executive Director of the Harry Partch Foundation.[x] Dean Drummond and his group Newband took charge of Partch’s instruments, and performed his repertoire.[xi] After Drummond’s death in 2013, Charles Corey assumed responsibility for the instruments.[xii]

The Sousa Archives and Center for American Music in Urbana, Illinois, holds the Harry Partch Estate Archive, 1918–1991,[xiii] which consists of Partch’s personal papers, musical scores, films, tapes and photographs documenting his career as a composer,

writer, and producer. It also holds the Music and performing Arts Library Harry Partch Collection, 1914–2007,[xiv] which consists of books, music, films, personal papers, artifacts and sound recordings collected by the staff of the Music and Performing Arts Library and the University of Illinois School of Music documenting the life and career of Harry Partch, and those associated with him, throughout his career as a composer and writer.

Partch’s notation is an obstacle, as it mixes a sort of tablature with indications of pitch ratios. This makes it difficult for those trained in traditional Western notation, and gives no visual indication as to what the music is intended to sound like.[xv]