Townes Van Zandt one of America’s greatest songwriters was born today.  He would have been 72, but left this world in 1997, far too early.

If to live is to fly, as Townes Van Zandt would warble, then he himself, to quote from his devout admirer Willie Nelson, was an angel flying too close to the ground. His quavering voice flattened with alcoholic pickling, the burdensome weight of bodily pain palpable in his throat, Van Zandt’s powerful songs resonated through artists such as Emmylou Harris, Steve Earle, the Cowboy Junkies, and Tindersticks over the decades with a decidedly dark edge to the proceedings. While often compared to Bob Dylan in terms of songwriting prowess, Van Zandt’s words relied less on stream-of-conscious glossolalia than on the barren wastelands inside his own head. The result is more Samuel Beckett than Lightnin’ Hopkins, and lines like, “I got a friend at last…/ His name’s Codeine/ He’s the nicest thing I’ve ever seen/ Together we’re gonna wait around and die,” convey a trailer-park existentialism that can make for a rough listen– one preferably with the windows shut and the whiskey opened, the gas on and the lights off.  (Andy Beta, “Townes Van Zandt: Absolutely Nothing”, Pitchfork, February 5, 2003)

Townes Van Zandt (March 7, 1944 – January 1, 1997), was an American singer-songwriter. Many of his songs, including “If I Needed You” and “To Live Is to Fly”, are considered standards of their genre. He had a small and devoted fanbase, but never had a successful album or single and even had difficulty keeping his recordings in print. In 1983, six years after Emmylou Harris had first popularized it, Willie Nelson and Merle Haggard covered his song “Pancho and Lefty”, scoring a number one hit on the Billboard country music charts.

Townes was a holy mess, his life a mix of the sublime and the horrific. By the time he died of a heart attack at 52 on New Year’s Day, 1997, the Fort Worth native had written a large batch of enduring songs and become the subject of colorful tales—many of them even true. They will be retold on March 28 when Austin City Limits airs “A Celebration of Townes Van Zandt,” during which Emmylou Harris, Willie Nelson, Lyle Lovett, Nanci Griffith, Steve Earle, Guy Clark, and others reminisce about their friend and play his songs. At the taping of the show on December 7, Nelson and Harris did “Pancho and Lefty,” which he and Merle Haggard took to number one on the country charts in 1983. Harris and Earle sang “If I Needed You,” which she and Don Williams took to number three in 1981. Griffith sang “Tecumseh Valley” and Lovett “Flyin’ Shoes,” as each had been doing in concert for years. Griffith called Townes “one of our greatest native folk songwriters.”

Before the show, Susanna Clark, who was one of Townes’s best friends, recalled how her husband, Guy, and Rodney Crowell reacted to seeing a TV interview with Griffith after he died. Griffith had said, “If there weren’t a Townes Van Zandt, there would be no Nanci Griffith.” Hearing that, Crowell said, “There’d be no Rodney Crowell.” Guy said, “There’d be no Guy Clark.” You could add Lovett, Earle, Jimmie Dale Gilmore, and Joe Ely to that list, as well as hundreds of wannabes with acoustic guitars and whiskey visions learning to play “Pancho and Lefty,” analyzing every twist and shade in its melody and lyrics and dreaming of the open road. For better and worse, Townes was the most influential Texas songwriter of his time.  (Michael Hall, “The Great, Late Townes Van Zandt”, Texas Monthly, March 1998.  Accessed 3/7/2016.)

When asked about his inspiration for arguably his biggest hit, “Paucho & Lefty”, Van Zandt answered with typical humility.

“I realize that I wrote it, but it’s hard to take credit for the writing, because it came from out of the blue. It came through me and it’s a real nice song and, I think, I’ve finally found out what it’s about.”

Today let us remember Townes Van Zandt for his songs and his humanity. 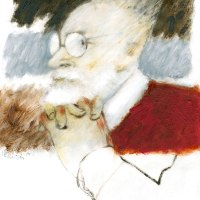