The Steel Wheels are a roots and Americana band, writing and playing music in the closely related but unique styles of blues, bluegrass, old-time music, and fiddle music. Virginia musician Trent Wagler is the lead vocalist and the band’s primary songwriter. Jay Lapp (mandolin, guitar, vocals) had been touring in several bands throughout the Midwest when he and Trent met in Harrisonburg, Virginia. The musical partnership formed, and it was the first incarnation of The Steel Wheels. Later, the two were joined by Brian Dickel (upright bass) and Eric Brubaker (fiddle), and The Steel Wheels were born.

“What sets The Steel Wheels from the Blue Ridge Mountains of Virginia apart from many bands is the combination of their stellar instrumentals, accentuated by the one of a kind lead vocal of [Trent] Wagler, and keenly supported by strong harmonies. Eric Brubaker on fiddle, Jay Lapp on mandolin, and Brian Dickel on bass weave in and out intricately throughout this record, painting vivid imagery which flows effortlessly, just teasing the lyrics enough to allow them to resonate within you.” – Country Standard Time 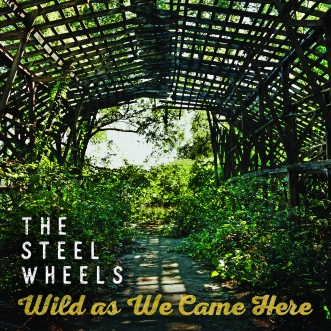 Wild As We Came Here is a significant leap for the band, which started its journey in 2004. Wagler, Dickel, and Brubaker studied at Eastern Mennonite University in Harrisonburg, Virginia, about an hour from Charlottesville. (All four members of the band grew up in Mennonite families.) Wagler and Dickel were in a punk/alternative band until acoustic music lured them in.

Wagler soon started crafting songs and learned flat-picking. Dickel took classes on building guitars. They briefly played as a duo before Brubaker joined on fiddle. Lapp eventually came on board after getting to know the band from the local folk circuit. In 2010, following a variety of EPs and LPs, the ensemble officially branded itself as The Steel Wheels, a tip of the hat to steam-powered trains, industrial progress, and the buggies of their Mennonite lineage.

Lapp says, “We found we really enjoyed singing and playing music together and it happened so naturally. To make it even better, everyone listens very well to what the other is playing, making it a total group experience. I’ve never worked with such a collected and well-spoken group of men, and it makes the experience of touring and performing a pure joy.”

Then as now, The Steel Wheels’ style weaves through Americana and bluegrass music, folk and old-time music, and the acoustic poetry of the finest singer-songwriters. By incorporating percussion and keyboards into the sessions for the first time, Wild As We Came Here adds new textures to their catalog, as themes of discovery and perseverance run throughout the collection.