Chris Coole got his first banjo when he was 17 years old after falling in love with the sounds of folk and early country music. Today, Chris is known internationally for his clawhammer banjo style, songwriting, and singing.

Early on, Chris discovered the joys of busking. His practice halls were the streets and subway of Toronto. He spent 10 years as a busker. :

“I would play clawhammer banjo for many hours a day. Sometimes I would play the same tune for an hour without stopping, coming up with variations and unconsciously working on my tone. Later, I learned to play guitar from busking with fiddlers like Ray Sullivan, Scott Prouty and Matt Haney. Me and Joey Wright learned to sing harmony together down there – singing duets and watching the world go by. It was a great time in my life that I wouldn’t trade for anything.”

Over the years Chris has split his time between playing bluegrass and old-time music and has allowed each to inspire the other to the point where it is now difficult to say where one ends and the other begins. This may be attributed to a. strong belief that country music is country music, be it Tommy Jarrell, Bill Monroe or George Jones.

Chris’ unique style of clawhammer banjo playing began to reach a wider audience with the release of his first CD Five Strings Attached With No Backing in 1997 and later, Five Strings Attached, Vol. 2 in 2000. Both albums were collaborations with long time musical partner, and fellow Torontonian, Arnie Naiman.

Another notable collaboration is his recording, Meet Me In The Music, with fiddler Erynn Marshall.  Bringing to the stage the old-time music they’ve been playing for years, on porches, in kitchens and at festivals across North America – Erynn Marshall and Chris Coole use fiddles, banjos, guitars and their voices to bring to
life music from another era. Whether playing bluesy fiddle tunes, banjo breakdowns, singing old ballads or country songs it’s evident these two musicians have dedicated themselves to the Southern traditions that have inspired them. They also compose vintage-sounding originals and blend old, new, near and far into a unique music all their own.

His first solo album Old Dog was released in 2010 to warm reviews and drew attention to his intimate songwriting style. In 2016 he released The Tumbling River, a follow-up of highly narrative story songs featuring seven more originals, firmly establishing his reputation as a unique, and grounded songwriter.

“Of course I wanted Old Dog to reflect my musical journey – discovering this amazing and weird world of old songs and tunes that seemed so far away from my own reality, yet so familiar…getting completely lost in it really…spending the last 18 years of my life playing this rural music in an urban setting and trying to find some personal context in that. I enjoyed working with the great musicians on this album and getting a chance to record some music in sparser settings than I have in the past. I hope that some of the musical instincts I’ve developed from playing bluegrass and old-time come through even though the music on this album gets away from the boundaries of those styles” 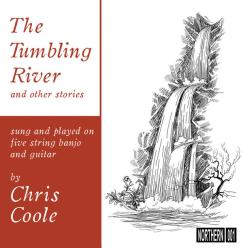 Eight of the twelve pieces are original compositions by Chris. “May Day #1,” which opens the CD, and “May Day #2,” which closes it, are instrumentals co-written with Andrew Collins, who plays mandolin, mandola, and mandocello on the last two cuts. Burke Carrol plays pedal steel on two, Brian Kobayakawa bows the bass on three, Ivan Rosenberg plays resonator on one, Simone Schmidt plays guitar on one and sings on two, Kristine Schmitt sings on four, and John Showman fiddles on one. Schmitt sings haunting lead vocals on Ole Belle Reed’s “Led Me To The Wrong.” Schmidt duets with Coole on “Stone Walls And Steel Bars” and sings harmony on “Reuben’s Train.” The fourth cover is “Beautiful Life,” which was recorded by both the Stanley Brothers and the Delmore Brothers.

My clawhammer playing has influenced my guitar playing immensely…once I let it. For a long time I got caught up in the whole bluegrass thing of trying to keep up with the hottest players, which was really futile for me. I’m just not that kind of player and I don’t really feel the modern bluegrass style of guitar. Once I accepted that it was alright to be playing bluegrass guitar and not be playing stuff that was in the ballpark with Tony Rice in the technique department, my playing started to get a lot more musical. I play out of chord positions a lot and use lots of the same hammer-ons and pull-offs I would use when playing banjo.